Photographer? Sign in
1x
by Matjaz Cater
My flight above the hop growing fields coincided beautifully with the first sunrays coming over the ridge of the hill. I was totally fascinated by the pattern and colors appearing below me.
This is an aerial shot of the fields in Savinjska dolina (Savinja valley) where different plant cultures are grown. The soil in the valley is rich with all kinds of nutrients, heavy metals and pesticides for the intensive production of hops — the plant that gives beer its special flavor. For that reason, special constructions are designed. 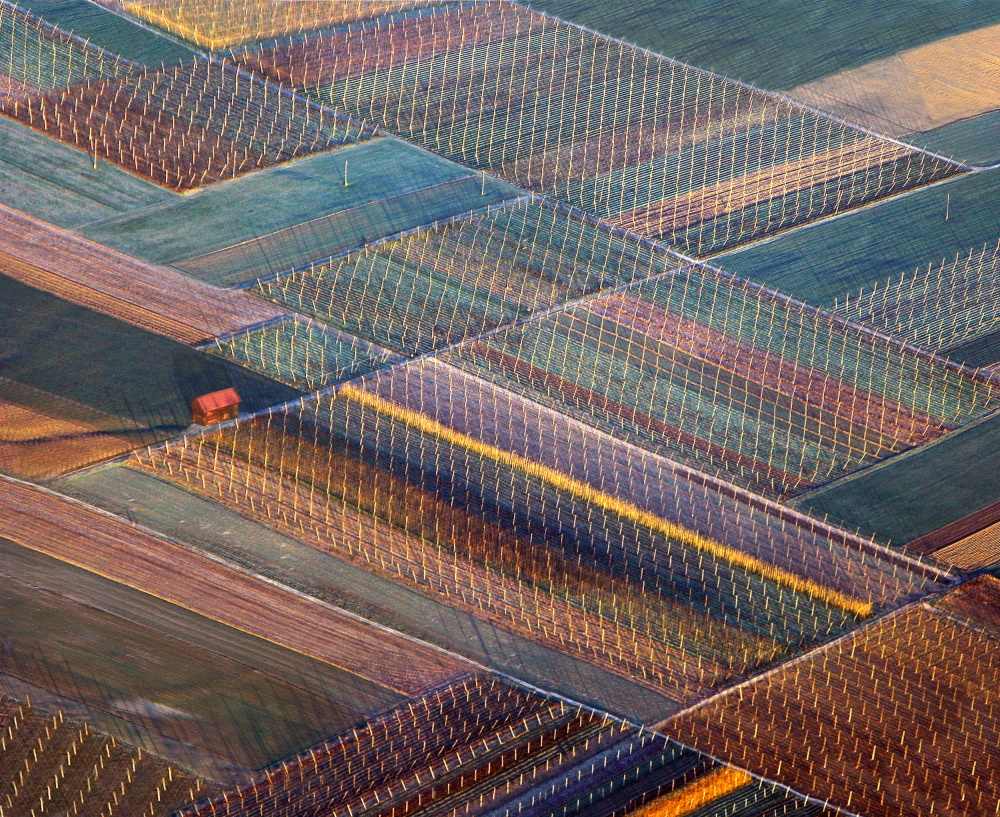 There used to be pillars made of wood, but these days they are made of concrete. They support steel wires, stretching like a web over the flatland. When the growing season starts, thin ropes are suspended from the steel wires down to the soil, supporting the plants and allowing them to grow up to 15 or 20 feet high (5 or 6 meters). This entire complex creates a special graphical effect when seen from above.
I was asked to take photos of some buildings in the upper part of the valley at the end of November, just before the signs of winter became evident. The weather had not been promising so far, so I wanted to utilize any opportunity before the rain and snow came.


"Flying with the sun behind me was fascinating and the contrasts became even stronger when the whole valley opened in front of me."

According to the weather forecast that day, there was a short window of time with no strong winds. I took off at dawn and gained some safety height before passing a few hundred meters over hill ridges that were 2,500 feet high (850 m). Moisture in the valleys and clarity of the sky were promising, and after the first test shots I was satisfied with the camera settings. Flying with the sun behind me was fascinating and the contrasts became even stronger when the whole valley opened in front of me (fig1). The color pattern was gorgeous, in spite of some pronounced frosty cyan tones below in the herb layer. The contrasting red colors were almost burned, so I tried to descend in order to get a better composition with sharper lines and shadows.
POST PROCESSING
I used Photoshop to make a few adjustments to the image.

1) The cyan tones were too dominant for my taste, so they were reduced in saturation, which balanced with the other colors much better (Fig 2 and 3). 
2) In the lower-right corner of the image, a white plastic bag was removed with the Clone Stamp tool to emphasize the building.

3) The Contrast was slightly enhanced (approximately 10%) to make the shadows darker throughout the image.

4) The upper-left part was cropped out for better composition.

TIPS
1) In cases like this, flying above the subject, you rarely get a second chance to take a shot, not only because you are moving, but also because the light conditions change quickly. I normally use Shutter Priority with short exposure times (1/1000 second). On this day, the flight was smooth and 1/400 second seemed like a good compromise for the sunrise conditions. ISO was also fixed.

2) The human eye can be very deceptive, so I am happy to see on the LCD what I recall from my memory. By zooming in on the camera display after taking a shot, you can check to see if the timing was correct and if the image was sharp enough.

3) No matter how important you think the technical settings are, it is good to double-check and charge the batteries, clean the lens, have enough fuel and make sure there is enough space on your memory card. Following weather forecast and respecting airspace restrictions helps to reduce any chances of unpleasant surprises.

4) Charged batteries would not guarantee operability in sub-zero temperatures at cruising speeds of 55 to 80 mph (90 to 130 km/h). It is good to keep the camera close to the body. Changing batteries in the air does not work well. Either you lose the glove or the fully charged battery.

BIOGRAPHY
I'm in my late 40s, living with my wife, two children, four cats and a dog. I work as a forest researcher at the Slovenian Forestry Institute. I learned the basics of photography and flying from my father, while aerial photography came by accidentally when a professional colleague needed some aerial photos of the neighboring forest.