By photographing Leonardo da Vinci’s Mona Lisa with a long exposure, I was able to capture the contrast between masses of passing people and this timeless masterpiece hanging on the wall. 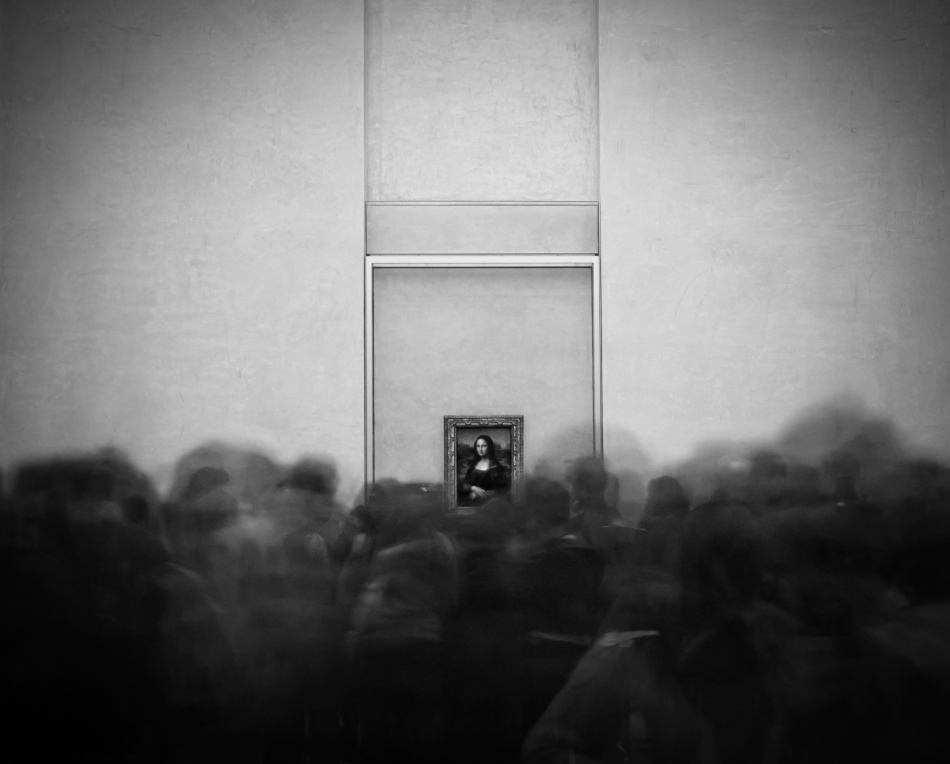 Canon 7D  .  Canon 15-85mm  .  30ss  .  f/6.3  .  ISO400
I live in Paris. It is one of the most creative cities for a photographer, but it is extremely challenging to take an original picture as each monument is photographed thousands of times each day by people from all over the world. Therefore, I spend most of my time in this wonderful city thinking about how to take images that are different.
After taking photos of the most famous places in Paris with the long exposure technique, I had an idea to photograph the Mona Lisa with this technique. Based on my many visits to the Louvre, I knew that there were always lots of people struggling to see this little painting. My objective was to capture the movement of the crowd and to place the Mona Lisa amidst the throngs of visitors. To capture as many people as possible in the picture, I went to the museum on a Saturday.


"Museums do not like the use of tripods, so my idea was to use it as quickly as possible to avoid problems."

Museums do not like the use of tripods, so my idea was to use it as quickly as possible to avoid problems. I had to prepare everything before taking the tripod out of my bag. The room is very symmetric, so I decided to place the painting right in the center of the picture. I set the focus manually and was careful not to change it because it is harder to focus when my 10-stop ND filter is attached. I took some test shots to select aperture, shutter speed and ISO. The aperture was set to f/6.3 and ISO was 400. Finally, I took two 30-second shots and put the tripod back into my bag.

As expected, in both shots the painting was a bit covered by moving people, so I decided to take a few other handheld photos of the painting only that could be useful in post-processing.

When I looked at the final result, I was pretty happy because it was exactly what I had imagined. I think that the contrast between the passing people and the timeless masterpiece is the most interesting part of this picture.
POST PROCESSING
I used Lightroom 4 and Photoshop CS6 for post-processing.

1) In Lightroom, I selected the best 30-second shot as well as one of the last shots I made of only the Mona Lisa. I exported them to Photoshop as two layers.

2) Then I aligned the layers with Edit > Auto-Align Layers. I put the long exposure layer on top of the one with the entire Mona Lisa and added a Layer Mask to the upper layer. On this Layer Mask I then painted with black over the Mona Lisa to reveal the painting of the underlying layer.

3) In order to make it look realistic, I painted the border of the painting with a Brush set to 50% Opacity. I flattened the two layers and returned to Lightroom.

4) In Lightroom, I converted the picture to black and white, and then increased Clarity (+8) and Contrast (+4). In the Tone Curve panel I made an S-shaped curve. I also reduced noise, and cropped the image to an almost square format.

5) I sharpened the painting using the Brush tool in order to increase the contrast with the other part of the picture that was pretty blurry.

6) Finally, I added a vignette (–28) to make the painting stand out.
TIPS
1) In my opinion, long exposure photos of people are more beautiful when the place is very crowded or, paradoxically, when there are only one or two people. I think that the effect has less impact with small groups of moving people in the picture.

2) Some pictures have to be prepared and imagined. I like to be creative and spontaneous in the field when shooting, but some ideas come later at home, and I try to remember all of them. Even if these ideas seem difficult to realize, give them a chance. Maybe they will need some post-processing, but it is always very satisfying to realize one's visions.
BIOGRAPHY
I am 26 years old and work as an air traffic controller in Paris. I have been an amateur photographer for five years.