I cannot show you how to make a wild lioness run like she did here. I can only help you to be prepared if you are ever lucky enough to witness a similar situation.
The natural beauty of the landscape and wildlife in South Africa has always amazed me. The camera just enhances that appreciation and pushes me to further explore the wild places in my native country.

Being able to read the behavior of animals is critical for creating good wildlife images. You need to anticipate action and capture it in the fleeting seconds you have.
I have often failed to do so, but every time you try, you learn something to help you nail the next shot. You also need to know your equipment inside out. Being able to make split-second adjustments to your settings is the key to making the most of a shoot, especially if the light changes constantly. It is also quite rare to get photos of lions doing much else than sleeping. They can sleep for over twenty hours a day! 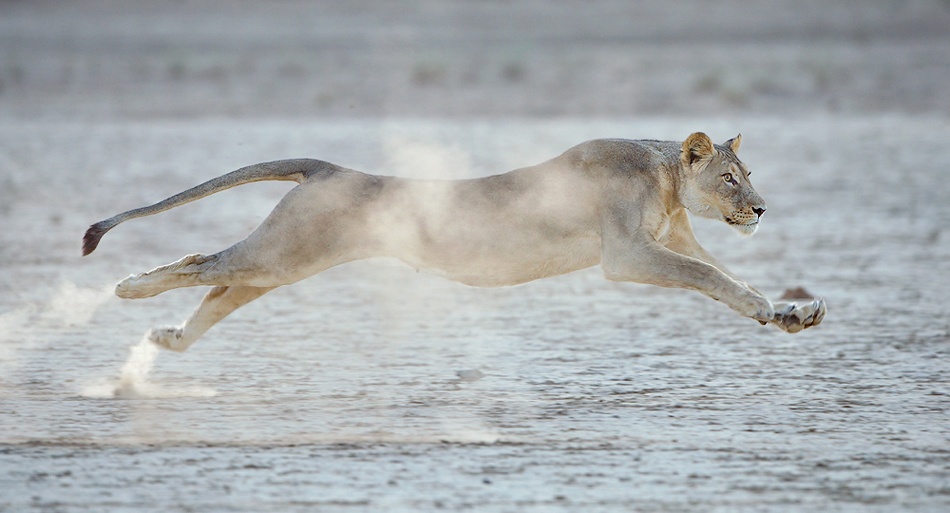 
On a recent safari to the Kalahari, we saw a pride of lions. Anticipating that they would move south towards the nearest waterhole during the night, we set off first thing in the morning in that direction. As we approached the waterhole we saw the lions, lying flat on a dusty dry riverbed around dawn. There were also two young eland antelopes wandering around on their own. Their lack of protection from the herd and the fact that they were immature made them very interesting targets — and the hunt was on.


"While I was shooting, the camera rested on a beanbag suspended on my car door. That is a very quick and useful trick to have a steady and adjustable support for your telephoto lens."

I was shooting with a prime 500mm lens on a full-frame camera. I could only hope the chase would not come too close to me or it would have been difficult to follow them and frame the entire animal. I positioned my vehicle in the direction where I anticipated the chase to move. While I was shooting, the camera rested on a beanbag suspended on my car door. That is a very quick and useful trick to have a steady and adjustable support for your telephoto lens. I set my aperture to f/5.6, one stop down from wide open, for more depth of field. The shutter speed was 1/800 second, giving me an ISO of 2500 which I knew my D3s would handle well without producing too much noise.


"When the lioness eventually took off after her intended prey, I kept the central autofocus point on her face/eye by panning along with her movement."

For what felt like an eternity, the lions were lying motionless as the elands were moving closer to them without even knowing they were there. When the lioness eventually took off after her intended prey, I kept the central autofocus point on her face/eye by panning along with her movement, which was more or less at right angles to my position. This ensured a series of sharp shots while still allowing a little motion blur in some frames. I captured a sequence of shots, but as with photographing birds in flight, it is all about the pose, the head angle, the critical sharpness and the implied movement. This one frame stands out for me in that regard.

The lioness kicked up a lot of dust, which affected the contrast and color of the final photo. It was also around sunrise, with clouds in front of the rising sun, so the light was low and soft.
POST PROCESSING
In post-processing, I stuck to the basics and attempted to render the image as true as possible to the conditions I recalled. I added just enough contrast, vibrance and warmth to make the end result pleasing without losing the authentic look and feel. In my opinion, wildlife photography should be as true as possible to the scene you witnessed. I did not have to crop much.
BIOGRAPHY
I'm from South Africa. Although I am an industrial engineer by profession, I have always enjoyed whatever allows me to express my creativity to the fullest. Photography turned out to be the perfect marriage between my engineer brain and artistic soul. Showing off the glorious animals of the world is something I enjoy immensely. I am now also leading a few select photographic safaris to Africa’s last patches of wilderness. I love to experience the thrill of seeing Africa through my lens.
Check out my homepage