The girl in this picture is my niece, Wynolla Yasmin. Many times she asked me to teach her how to fly. I made this photograph to answer her question, and when I showed it to her she said: “Yes, I can fly!” I hope she doesn't ask me next to teach her how to fly from tree to tree.
This photo is dedicated to all the children who are growing up every day here on earth. I want it to evoke the thought and realization that we are giving the future to our sons, daughters and grandchildren. It was inspired by the way children live and learn about life. It seems to me that a large dose of children has the ability to cure even physical diseases. 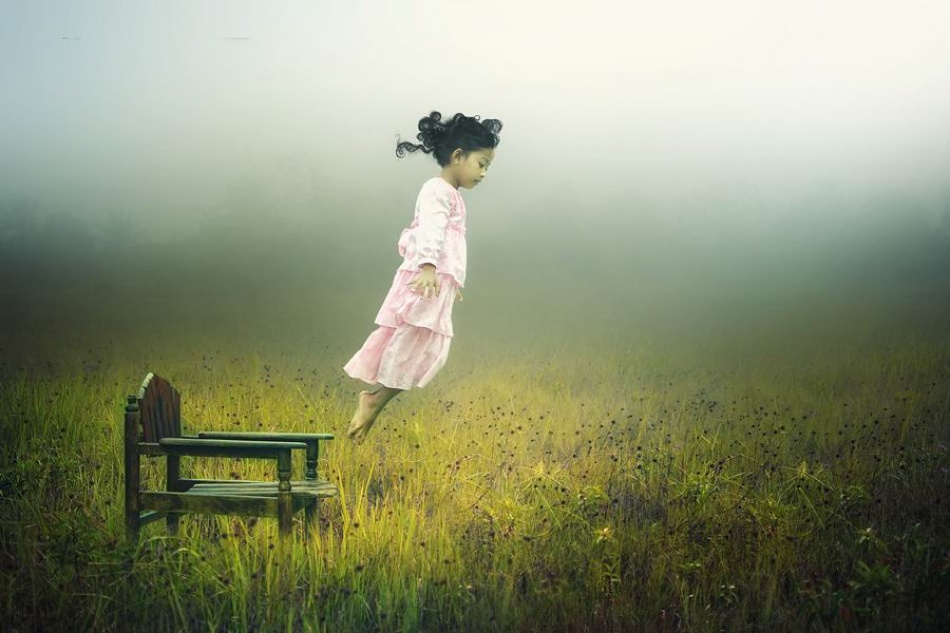 When preparing to take this photograph, I put a chair in my garden and used a silver reflector to balance the lighting and minimize shadow areas. The reflector was facing the chair in order to light the subject from the front. I also put a mattress in front of the chair so she would not hurt herself if she fell. Then I invited my niece over to play, jump and tell stories, which created a nice and comfortable atmosphere. I took practice shots to get her accustomed to the camera before we started taking actual pictures. The background is a photograph that I shot at another site.
"I taught my niece to jump by leaning forward, and I actually helped her by giving her a push. This way she did not have to bend her knees, and it looked like she was flying."

My country is located on the equator, so the sunlight is very good for photography during the early morning and late afternoon. I taught my niece to jump by leaning forward, and I actually helped her by giving her a push. This way she did not have to bend her knees, and it looked like she was flying. I used a Nikon D90 with a 35mm lens, 1/1000 second shutter speed to freeze the movement, and ISO 100 to keep the noise down. The aperture was f/2 to create shallow depth of field and also to make the selection process in post-processing easier. I spent more than thirty minutes on this shoot because I had to reset the position of the chair each time it moved, and I was also occasionally invited to make the leap myself. Out of the 25 frames I took I was able to use 4, and this photo is the one with the strongest expression.
POST PROCESSING
I use Photoshop to process my images.

1) First I manipulated the background by replacing some grass and removing disturbing objects.

2) Then I duplicated the background layer. By using blur effects, I created the illusion of mist. I lowered the Opacity of this second version of the background layer, which gives a blur effect so the trees could barely be seen. I combined this with some solid colors in Photoshop to create a dramatic impression.

3) When editing the photograph of the child, I used a Layer Mask to separate the girl and chair from the original background, copied and then pasted them on the background I had prepared. The details of her hair were difficult to select, so I used the Brush tool to draw hair and details on the final image. The legs of the chair were removed with the Eraser tool to make it look like it really was standing in the grass.

4) To make the vignette, I created a black color fill layer, and then adjusted the Gradient.

5) I adjusted the color by using Hue/Saturation and Color Balance. I also adjusted Brightness/Contrast and Curves to control the light intensity in the picture.

6) Finally, I made some selective sharpening by using the Unsharp Mask filter on a new layer with a Layer Mask.
TIPS
1) If you want to photograph children, you have to greet them with a big smile and jokes because it only takes a few seconds for them to decide whether they like you or not. You must have amazing patience.

2) Always pay attention to the details of each side of the subject, even down to separate strands of hair. Sometimes it's the small, less dominant details that greatly strengthen your photographic composition.

3) We forget that strong art is a creation that can make someone feel the emotion you are trying to convey. Try to make a work of art with a strong message in it. Perhaps it could be an expression of your feelings.
BIOGRAPHY
I was born in Indonesia. My father loved to paint. I became interested in photography in 1999 when I studied at a school in Yogyakarta. I have a daughter named Firstania Quinsha. She is two years old and likes to laugh as much as her father.