So far the tutorial section has been a bit short on tutorials with architectural themes. That changes now with Stefan Eisele's impressive photo of this tower, which he admits seems like something out of a Batman movie. 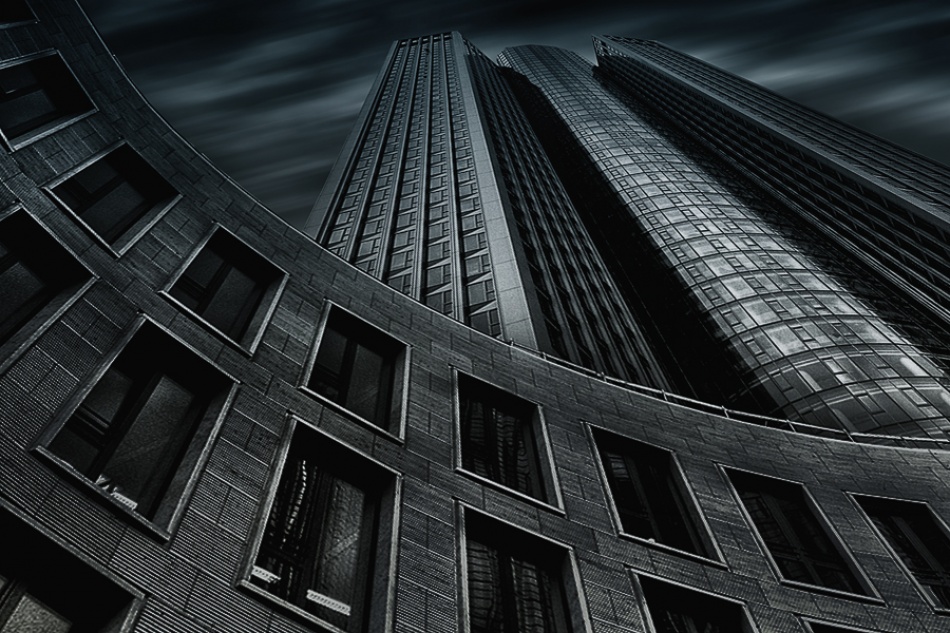 On my way to the Frankfurt fair, I passed this building which is located nearby to one of the main entrances of the fairground. This brand new high rise, called TOWER 185, immediately caught my interest. It’s a most amazing building that invites to be photographed.

I instantly decided to stop here first and to examine the building for taking some pictures, at which the visit of the fair lost its priority for a while. I walked around the building and took several images of the tower from different viewpoints, and different angles, always using the tripod.

When I saw the image for he first time in full size on the computer monitor, I had the idea of creating an outlook like the buildings of “Gotham City”, which I remembered from the Batman movie. It should look dark, dangerous, and especially big. So I tried to create a dark atmosphere and let the building look powerful.

The use of the neutral density filter in combination with a high aperture led to a blurred sky as well as the disappearance of humans who walked through the scene.

2. Conversion to black & white with NIK Silver Efex Pro. This included some manual fine tuning of lights and shadows.

3. In the next step, the layer was duplicated and an exposure reduction of 2 EV was done by using the gradation curve. The layer was masked in order to keep some areas with the exposure of the original layer. Thereafter both layers were merged together.

6. The portrait format tower image was copied and pasted into this new layer.

7. The image was transformed into landscape format and cropped so that a part of the foreground disappeared and the curve of the building runs into the upper left edge.

8. As a final step a slight high pass sharpening was done.

The post processing should create a dark, dangerous, and imposing impression. Reactions of the viewers indicate that the image fulfills what I had in mind.

- Try to realize prior to pressing the shutter button if it’s really useful to take the shot. The digital possibilities often lead to taking too many shots of all and nothing which is not necessary. This way you can hardly learn to get the right view or feeling for shooting a motif.

- It’s more important to use a good lens than an expensive high end camera.

- Be well versed with your camera, be aware of their advantages and disadvantages so that you are able to use the necessary settings quickly all the time.

Stefan Eisele was born in 1960 and has 30 years of photo experience. Today he is working professionally as an insurance expert. His first camera was an Yashica, followed by a Nikon. Black & white development was done in his own darkroom. Later on, he used analogue medium format cameras, before switching to digital. When the Sony Alpha 350 entered the marked he wanted to try it out. Still today, he is happy to take shots with the very same camera.