Today we will take a look at something as ordinarily as a staircase, but from a different angle. Belgian photographer Marc Apers shows us how small adjustments to a photograph can create something new altogether. 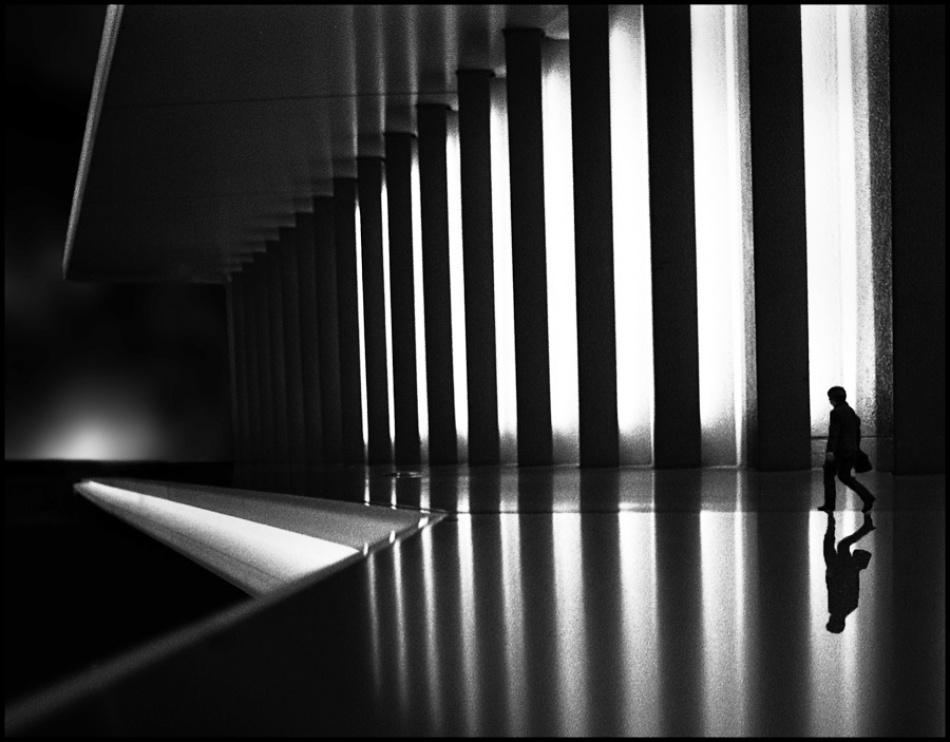 This image was made during a visit to the Ruhr area in Germany.

The original photo is in fact a vertical staircase, being illuminated. I felt that this image became a lot stronger when rotated 90° counter clockwise. By doing that, I wanted to create the impression of a gallery hall.

I always try to bring a story in my images.  In order to complete the 'story' of the gallery, I added at the right of the image a small figure, together with his reflection. Additionally I created some extra light at the end of the gallery to give the image a sort of alienating effect.

With this photo I wanted to create a strong graphic effect in 'black and white', in contrast to the lonely visitor, walking in this gallery but at the end still reaching his destination.

I dit not only get a lot of positive reactions on this image, but many also recognized the expression in it that wanted to create.

The original photo is an analogue image made with a NIKON F3 camera, using a prime 24 mm Nikon lens. The film was a KODAK Tri-X 400 Pro.

The film was processed in Microdol X (1/3) and digitalized with an EPSON Perfection V700 Photo Scanner.

All processing was done in Photoshop CS3.

For converting my images to 'Black and white', I always start by applying a gradient map. It gives you a first and rather good impression of the B/W strength of the image.

To further make the whites stronger and more 'vivid', I use the high pass filter at a setting of 0,9 with a overlay blending mode.

⁃ Try to 'tell' something through your image and try to create a 'wow' feeling for the viewer.

⁃ Make your composition not too complicated, but emphasize a few essential elements in it. The main
topic has to catch immediate attention.

⁃ Use your tone rendering to support and to optimize the composition: brightness/contrast throughout the
image, deep blacks, vivid whites.

Marc Apers is a Belgian photographer with over 100 photos published at 1x. He describes himself as a "classical photographer" in the way that he emphazises that it is important to start with a 'good' image that stands on its own in the capture itself.

He is a skilled documentary photographer with a talent of making portraits of people in their natural environment, always using natural light.

His initial steps in photography were color slides , but soon he turned to B/W photography. After working almost 20 years in the darkroom, 2010 he finally made the decision to go digital.