A lot of photographers are familiar with the Indian festival of Holi where revellers throw coloured powder and coloured water over each other. Indeed similar celebrations now take place in many countries giving photographers an opportunity to capture some dramatic images but often not without the risk of becoming multi-coloured themselves. 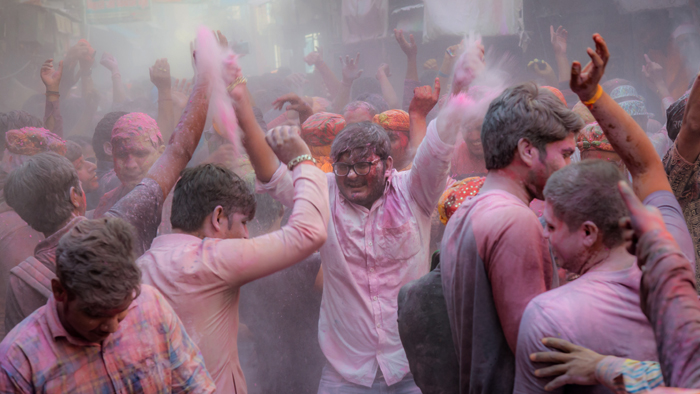 Being in India, I had the chance to visit Vrindavan, the birthplace of Krishna, the father of Holi and where locals and visitors celebrate with particular exuberance. Vrindavan is the place where Lord Krishna grew up. When Khrishna was young, he complained to his mother that his friend Radha was fair skinned whilst he was dark. His mother suggested that he applies colour to his friend and thus began the tradition.

The opportunity to capture mid-air paint throwing, the vibrancy of the occasion and the enthusiasm of the revellers was too good to miss. But preparation was required. A hotel in Vrindavan itself was relatively easy to find despite the popularity of the occasion. Inexpensive clothes were bought specially as some of the paints don’t wash out and photographically, protection for the camera was essential. I didn’t have access to a rain cover as we only had short notice so I improvised using a large clear plastic bag with a hole for the lens. With a UV filter screwed tightly in place rubber bands and adhesive tape provided a paint-proof seal around the end of the lens: a 24-120mm Nikon zoom. Camera controls, including zoom operation of the lens were carried out with hands inside the bag, which was long enough to hope that paint would find it difficult to enter. 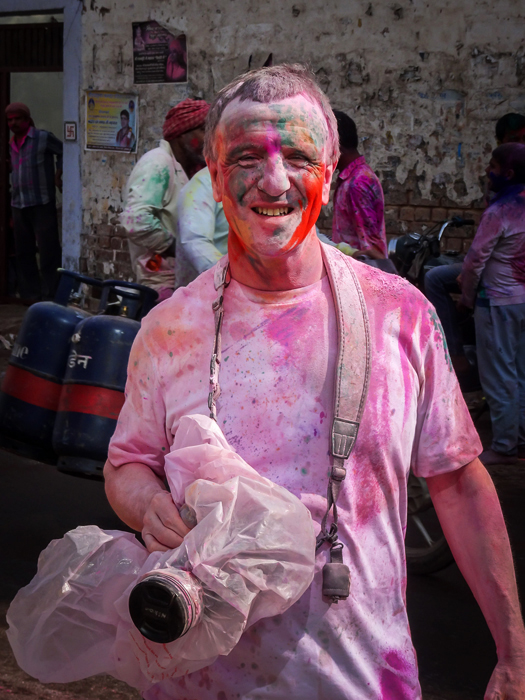 With the early planning in place, our strategy was to get right into the centre of the crowd and make our way (with everyone else) to the Banke Bihari temple. This was a reasonable strategy though the pace was fast and furious and shots of individuals at such close quarters were more luck than judgement, particularly as the bag soon became opaque with paint and near impossible to see through the bag into the viewfinder. Changing camera controls also became hard so don’t take a camera you can’t operate by feel alone!

On several occasions, the crowd surged and we were carried along in the narrow streets. As foreigners, we were a significant source of interest for selfie hunters and as paint targets and there was a real danger of falling and being trampled with risk of injury and damage to equipment. We managed to find relative safety in a doorway and later a small ledge as vantage point. We never in fact made it to the doors of the temple: it was just too packed.

The results of this folly can be seen in the following images. 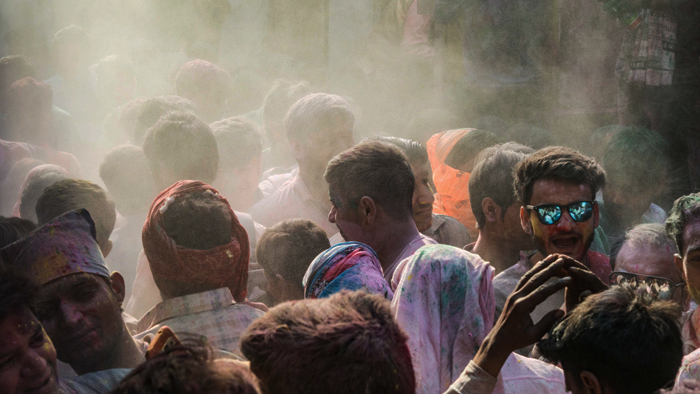 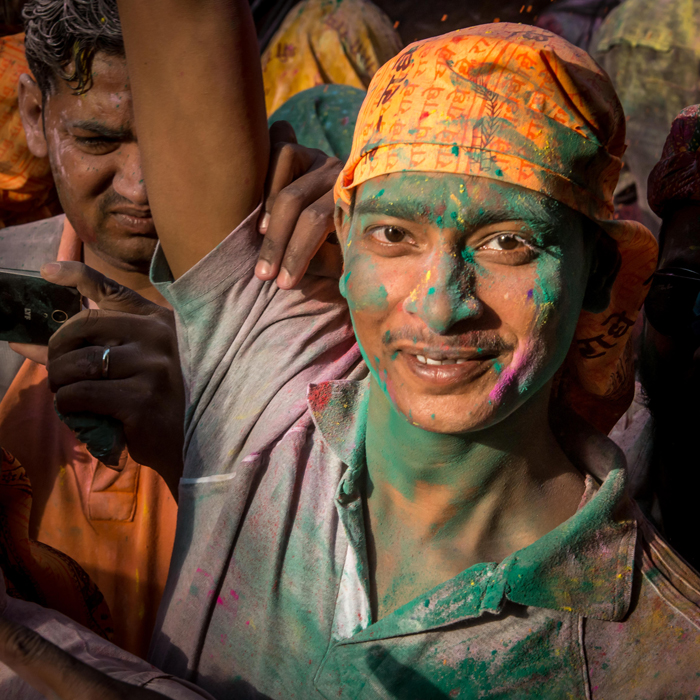 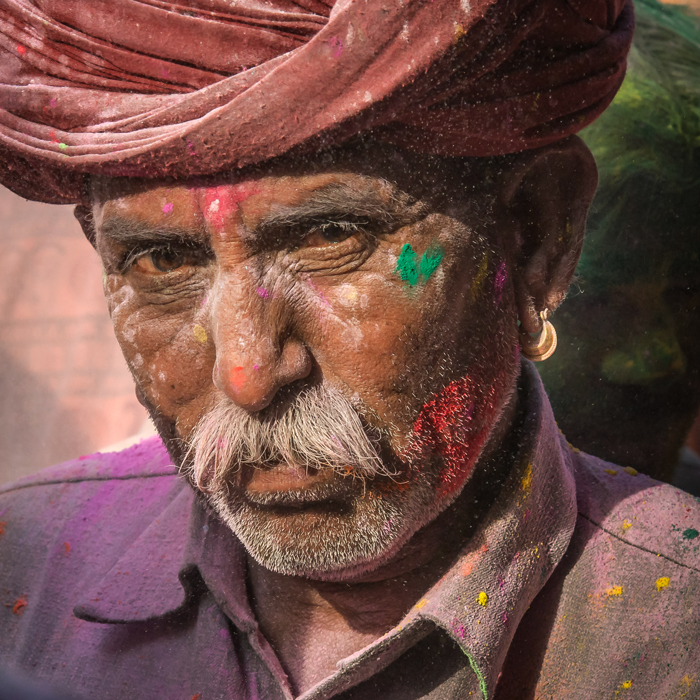 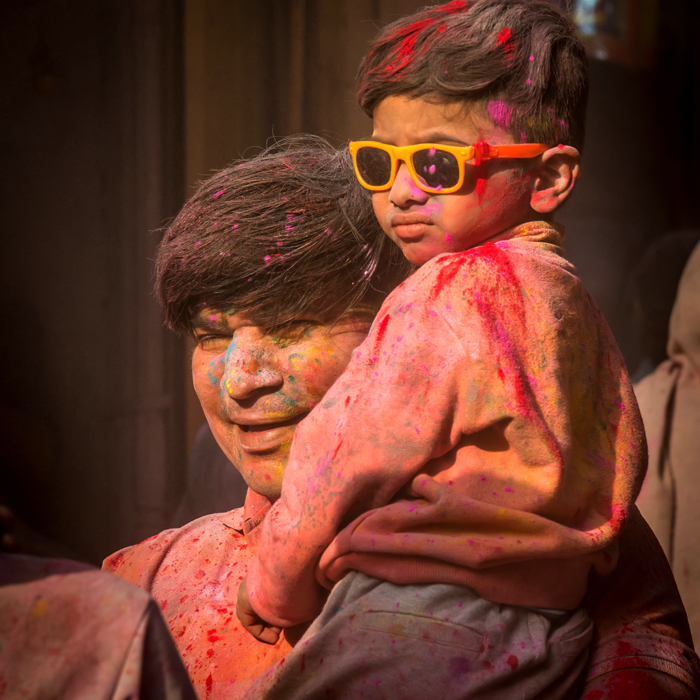 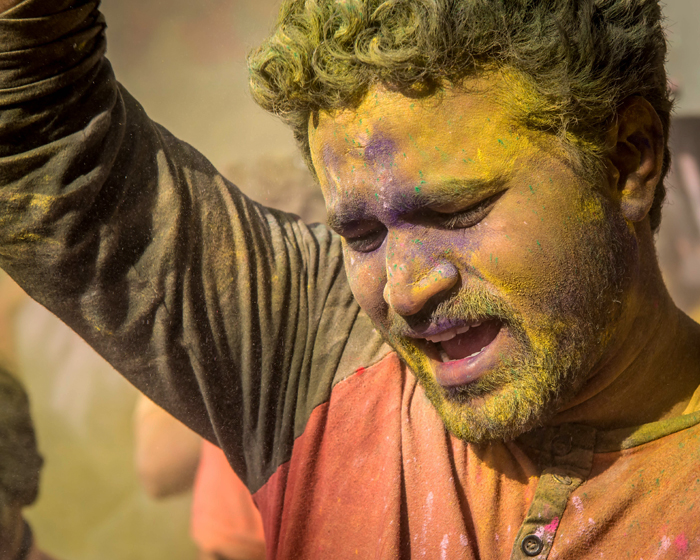 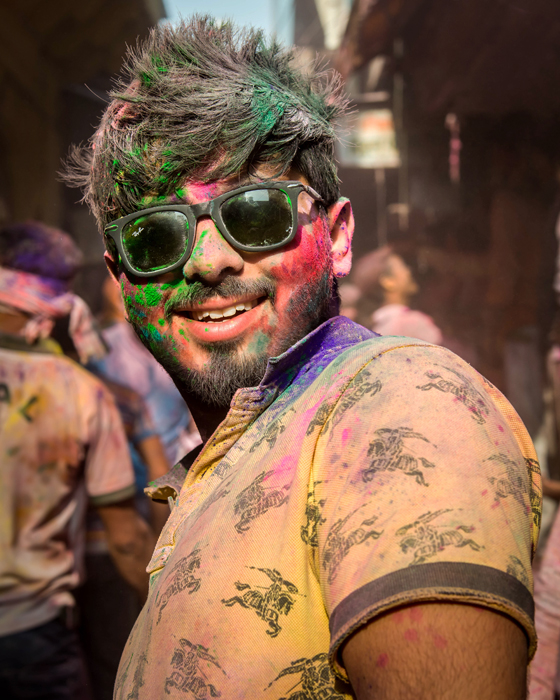 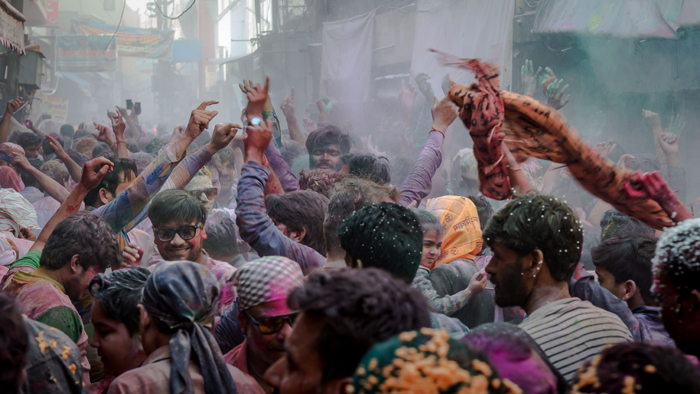 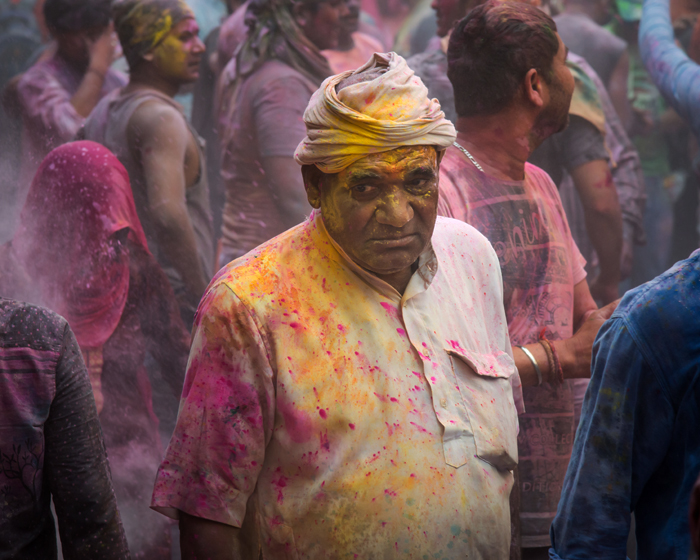 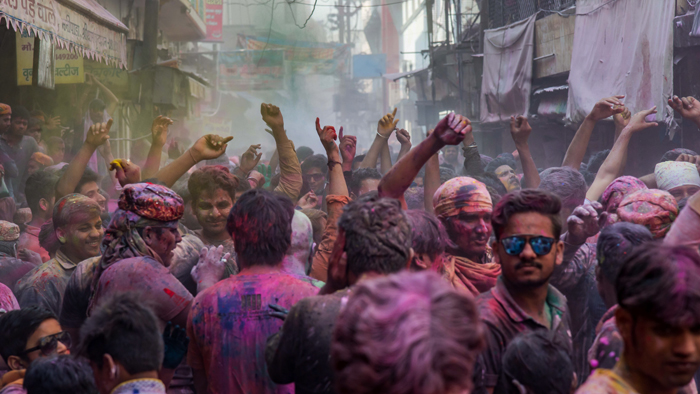 (Almost) everyone was very friendly and there are some great characters to capture.
But what lessons were learned?

* You really do need some inside knowledge of where to stand, how to get there (and out again) and at what time.

* A high vantage point is essential – but not too high: you still need to be part of the proceedings, not a spectator, or you won’t capture the atmosphere. And bear in mind that once at your vantage point, it may be very difficult to move to another location.

* Plastic bags and similar covers are too flimsy. Mine was about 80% OK but came loose after about 2 hours. Paint power got into the back of the bag and over the camera, but not too badly and was able to be wiped off later. I’ve yet to find the idea protection!
Take a large-ish microfibre cloth, not a small lens cloth. You’ll be wiping the dust off the filter every few minutes. And be prepared to sacrifice the filter too or buy a cheap one specially for the purpose.

* Use back-button focus or sacrifice your principles and set the focus to auto. You won’t have the feel to do half-press shutter releases in the heat of the moment. And set the controls before you leave your car or hotel to something that’s going to have lots of latitude to cope with a wide variety of lighting conditions, like aperture priority at f8, ISO 400-800 and around plus half a stop of exposure compensation. You may not get the chance to change the settings.

* A short zoom is ideal as you’ll want both portraits and atmospheric crown shots. A long telephoto will just get in the way and risks damage as well as attracting unwanted attention. Don’t event think of changing lenses – or even batteries unless you’ve retreated well out of the battle zone (in which case you may never get back in).

And would we do it again. Oh yes: that experience was too hard won!
Peter