Take it from a highly successful portrait photographer: when you're photographing kids, you better plan in advance, pack light and shoot fast! If you want to know how it's done, and done to perfection, you definitely want to read this. 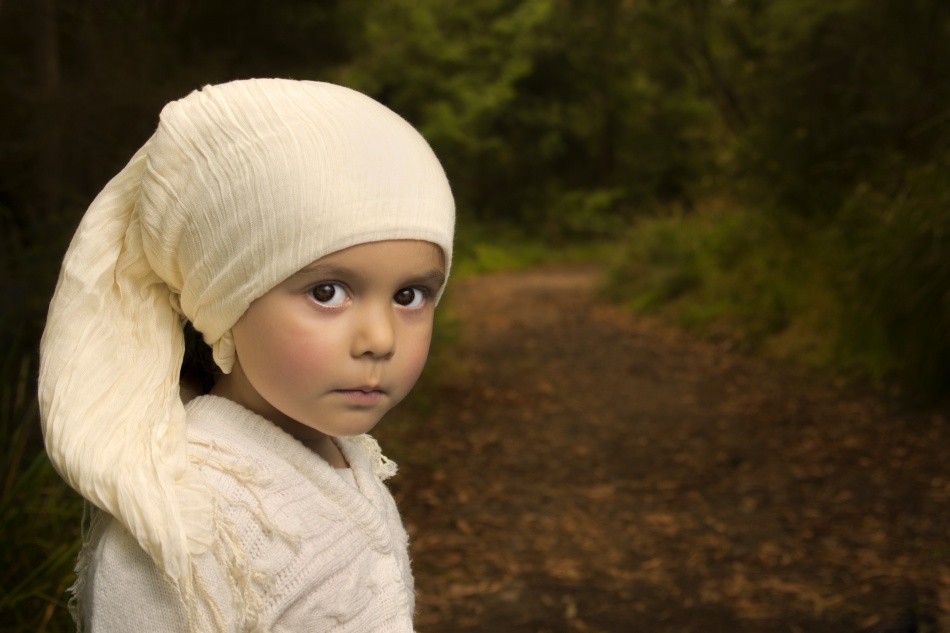 Sometimes ideas can be preplanned hours, days, even weeks before pressing the shutter button. Other times ideas can be spawned after glancing at a location or by observing the ambient light falling on your surroundings for a few seconds, even when photography was never the prime purpose. The idea for this photo came after seeing a small location not far from home that held some potential.


"And although bribes of lollipops and treats can work, there has to be a degree of responsibility on our part as responsible adults."

As a portrait photographer I shoot the occasional client in the traditional clean portrait style, which is what is usually requested. In my own personal work, I choose to display for competition and exhibition more of a fine art, experimental style for which I use my young daughter as the model. As a four-year-old girl she is accustomed to being in front of the camera. This works well since she is always herself, with her own expressions, whether the camera is there or not. You can only photograph young children when they allow it. And although bribes of lollipops and treats can work, there has to be a degree of responsibility on our part as responsible adults.

As in most of these planned shoots, she only has a certain amount of patience before becoming very bored. So it's important to get the shot within the first five minutes or so. If it goes longer than that then it's a struggle, and it is best to try another time. Fortunately, this shoot was a little different from my other shoots because this was an outdoor location away from the usual indoor studio environment. So the attention factor of what we were doing lasted longer than usual, and therefore gave me many more photos. This is why preplanning and setup is so important. You just have to place the child in the scene and start shooting immediately. If you're fumbling around adjusting lighting and lenses, you are already lost.


"So location shooting to me means having all three variables right: (1) no rain, (2) no wind, and (3) quality light, preferably an overcast sky (nature's big octabox)."

After getting the idea for the photo upon finding the location, the rest was a matter of setting up the shot. Most of my work is set up, and people who are familiar with my work also know that I'm primarily a studio photographer. I prefer to have full control of my environment, so shooting outdoors on location always presents a challenge. But it can be so rewarding once all of the elements fall together. The problem with shooting outdoors is usually weather-related for me. Living in Melbourne, Australia, this city is well known for having all four seasons in one day a few times over. So location shooting to me means having all three variables right: (1) no rain, (2) no wind, and (3) quality light, preferably an overcast sky (nature's big octabox).

Since I live in the suburbs only a short drive from the city center, I don't exactly have a country road or farm orchards anywhere near me. It would mean going for a bit of a drive to find the right location, and then hoping I'm not drawing too much attention when I get there. I was driving to the local store and noticed a small gravel path just off the main road, running parallel to the local creek. I've always known the creek was there with an asphalt bike track next to it, but I thought I'd have a quick look to see where this gravel path went, and if it had any potential. Fortunately, it turned out that it was a sort of short detour gravel path, maybe 330 feet (100 m) or so in length, that connected the footpath from the main road to the asphalt bike track.


"So far the people who have seen this shot really think I went to some old country road to shoot it."

With the right focal length and framing, I knew I could work this well. So decided to go back with the child, a Speedlight with a small shoot-through umbrella on a mini stand, the camera and remote flash (RF) trigger, and not even a spare battery. So far the people who have seen this shot really think I went to some old country road to shoot it. Little do they know that just behind me was an asphalt bike track, and further forward just after the bend in the photo was the footpath from the main road, complete with the traffic noise of trucks and other cars drowning out any serenity that the scene appears to have.

Even though I hadn't shot in an outdoor location for a while, this photo worked out better than I had expected. I wanted to convey a rural setting, and I managed to convince viewers that it was shot in a place far from the urban sprawl in which I live. This alone makes this photo a success for me as I already set the scene by careful placement of subject, use of focal length and careful lighting techniques to create an environment and atmosphere.
POST PROCESSING
Post-processing is another part of the photographic workflow, and although my studio work is mainly post-processed, this particular photo was only slightly touched; the ambient lighting along with the right Speedlight power created the atmosphere that I wanted straight out of camera. I never work the post-processing with any particular values. Every image is worked on as an individual image, and I prefer to work it like a chef: going by taste and smell as its cooking.

I only made a few adjustments to the image in Photoshop.

1) First I removed some darker debris from the path.

2) Then I applied overall Hue/Saturation and Curves adjustments for some pop, a touch of eye enhancement and smoothed the skin a bit, just to give the subject a more ethereal presence.

3) Using a wide-angle zoom lens at its closest focusing distance rendered the background out of focus enough to give it a painterly backdrop.
TIPS
1) Previsualization — Take the photo in your mind's eye before you press the shutter button, especially on location. In a public place there are many good reasons why you want to be in and out as quickly as possible without attracting too much attention.

2) Pack as light as possible. Sometimes, the more gear you take and have to negotiate, the more it can get in the way of the creative process.

3) Have an assistant close by. They are invaluable on location when it comes to holding a light stand, moving a hair away from the model and looking over your shoulder while you're busy shooting.
BIOGRAPHY
I was born and live in Melbourne, Australia, and I am a self-taught photographer who learned the technique of photography using a 35mm film SLR camera from the mid '90s. I switched to digital in 2005, practicing the art of photography and constantly refining my style.
Check out my  homepage