Has your long-planned photographic trip been canceled? Is the outdoor light boring or is the rain bucketing down and your camera not waterproof? Well, then it is high time you tried living room macro photography. This is an extremely attractive option for lazy photographers, since the subjects are available at your own home. 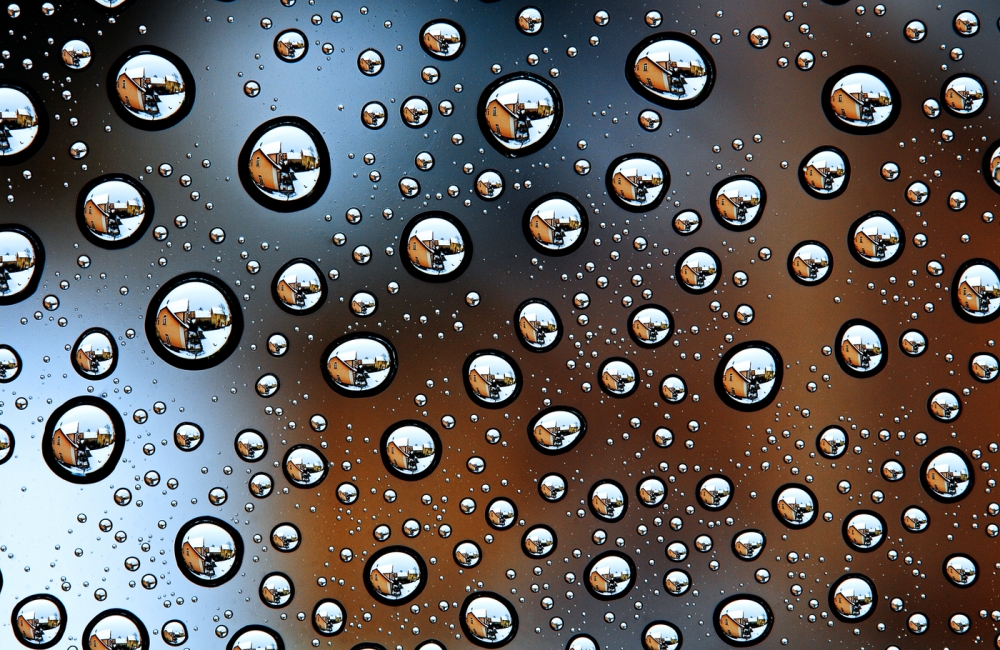 "Neighbors"
While visiting friends one day, I noticed that the snowflakes sticking to the windowpane were slowly melting and forming larger, more regular beads than ordinary raindrops. The water was also not running down the window as it normally does when it rains, and this added to the overall impression of orderliness. Unfortunately, I had not brought my camera along, and the tiny images of the environment seen through these “water lenses” were not particularly interesting either. So I had to wait for a better opportunity.
Impatient photographers may at that point wonder whether they have to wait for snow or if they can instead give nature a helping hand. I tried to achieve that effect by using a spray bottle and was successful, but only at freezing temperatures outside (32°F/0°C). At higher outdoor temperature, the droplets were smaller and more irregular. The reason for this is probably the surface tension, which causes drops to form in the first place. The surface tension for water increases at a lower temperature. This would explain the particularly big, stable and regular water drops forming on a windowpane with a temperature just above the freezing point.


"It is good to be very precise here, since the depth of field is extremely small and even the slightest deviation can degrade the image significantly."

Once there are suitable water drops on the window, it is rather easy to take the photograph. I put my camera on a tripod, directing it as straight as possible at the glass surface. It is good to be very precise here, since the depth of field is extremely small and even the slightest deviation can degrade the image significantly. Working with manual focus and checking the enlarged image with Live View is a good way to avoid numerous spoiled shots. You need to find an aperture that makes all parts of the drops sharp. The aperture should not be too small, which would degrade the image quality due to diffraction. The most useful aperture in this case was f/13. The resulting exposure time of 1/10 second is long enough for the moving mirror of a DSLR to cause camera shake, so mirror lock-up must be used. Basically, any genuine macro lens with 1:1 magnification would be suitable.

I took some photos in RAW format with different qualities of natural light. First I used subdued light and an overcast sky. Then I tried backlighting as the sun broke through the clouds, but found the sun reflecting in the rims of the drops rather annoying. I finally selected an image taken in cloudy light. In my opinion, a balanced distribution of varying droplet sizes produced the best effect.

Ironically, even though the same single house in my neighborhood is visible in all the drops, the image gives a fairly good impression of my surroundings. I live in a former settlement for industrial workers, built about 100 years ago, where most houses look the same. Indeed, the house represented in the image looks exactly like all the other houses in the neighborhood.
POST PROCESSING
What makes this subject attractive to me is that at first glance it looks rather artificial, like a montage. Still, the post-processing was really quite modest. I used Adobe Photoshop CS3. Any image processing software that allows you to work with curves should be perfectly adequate.

1) I developed the image in Adobe Camera Raw, slightly adjusting color temperature, clarity and color dynamics, and rotating the image 180°.

2) In Photoshop, I used the Healing Brush tool to remove some distracting dirt particles on the window.

3) I used Curves to significantly darken the midtones in the areas between the drops, to make the drops stand out more.

4) Using Curves, I darkened the rims of the drops, in order to emphasize the outline of each droplet even more.

5) I increased the saturation of some color tones, since the original colors were rather dull due to the subdued lighting. This helped to create the impression of a Pop Art image.
BIOGRAPHY
I live near Nuremberg in Germany. In addition to photography, I work as a saxophone player and music teacher.