With this particular image, I was stimulated to start exploring the world of conceptual photography, which has always fascinated me. I believe that a conceptual photograph is more than just an image; it is a representation of the photographer's inner self as a human being. This gives me the opportunity to “write” a whole story in one, single image, and it allows every viewer to interpret the image in different ways, which in my opinion is marvelous. 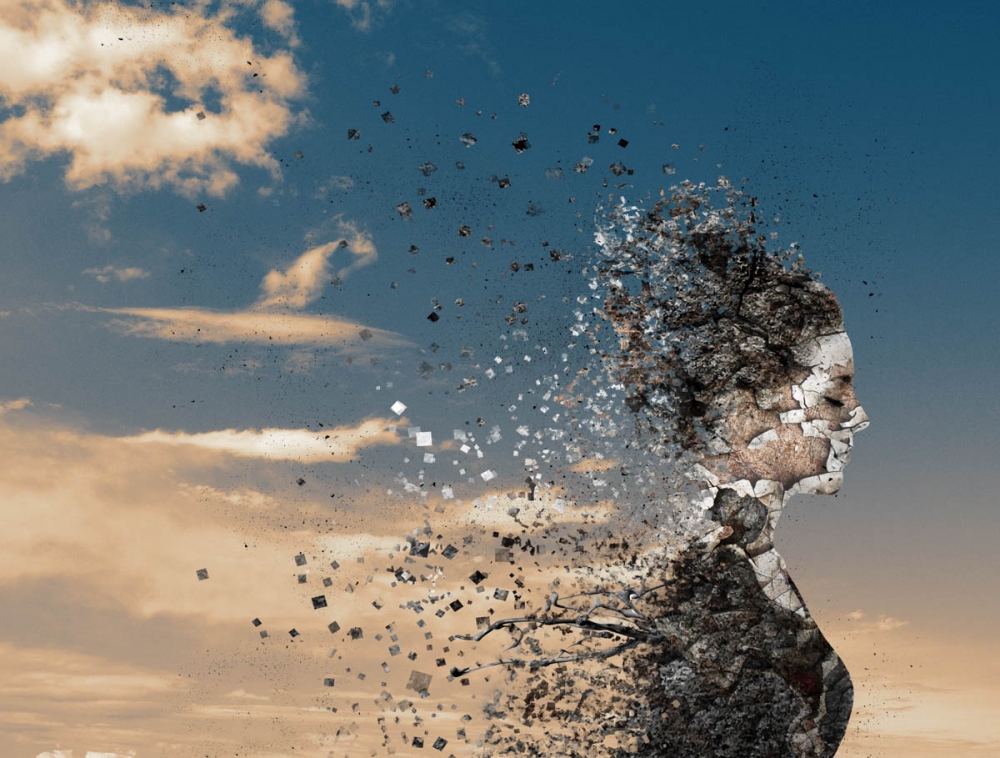 Nikon D7000 .  Nikkor 18-105mm f/3.5-5.6  .  1/200s  .  f/5.3  .  ISO800
In my images I always like to evoke feelings in the viewer's mind as I like to create more than just an image. Luckily the 1x weekly theme was "Sand." This immediately motivated me to try and create a dramatic image — to create a sense of nostalgia when looking at an image of sand that had connotations of the flow of time, lost memories and past experiences. So to include sand in my image I started to think about sand and what it evoked in my mind. I thought of an hourglass, with sand representing time, and thus life itself and how quickly it goes by.

I tried to portray this in my image by making my model dissolve into minuscule grains, creating a sense of wind delicately blowing onto her and making her diffuse into the surroundings. By doing so, I wanted to stimulate in the viewer a sense of fluidity as the sand leaves a trail across the sky at twilight. I wanted her eyes closed, as I believed I would achieve the intense mood I wanted to convey, hoping that the viewer would enter and see her inner world.


"I also selected a young female model since a young girl connotes fragility, the beginning of life and freedom. Sand, being very light and almost as fine as powder, can suggest the same idea."

I also selected a young female model since a young girl connotes fragility, the beginning of life and freedom. Sand, being very light and almost as fine as powder, can suggest the same idea. If I had instead used an older woman, my message would have implied dominance, independence or a lack of perceived innocence — the complete opposite of what I wanted to say with this image.

I photographed the model against a white wall. It was important for me to be able to easily extract her from the background so I could later insert her into the twilight sky image. It was also important that her facial expression was as natural as possible. I didn't want the features on her face to be fake; instead, I wanted her to seem as settled and relaxed as possible.


"Therefore, the viewer would associate the orange color with joy, creating an invigorating feeling as well as a sense of warmth and regret, thus successfully achieving my concept of nostalgia."

I shot the photo of the sky at the end of August in my holiday town in Tuscany. The rich colors that I was able to capture were very important, but I still needed to later increase the saturation and contrast to enhance the already beautiful colors. My decision to use a sky at sunset was to imply the idea of the end, and it complemented the idea of my model disappearing. I made sure that the clouds were soft orange shades, which I would also represent in one of the shades of sand on my model's face. This was not only because I wanted to create a sense of unity within the picture and to enhance my model, but also because the color orange combines the passion of red and the happiness of yellow. Therefore, the viewer would associate the orange color with joy, creating an invigorating feeling as well as a sense of warmth and regret, thus successfully achieving my concept of nostalgia.
POST PROCESSING
There was a lot of post-processing, but after applying many layers and layer masks, my picture came to life. I used Photoshop to process the images and to construct the montage.

1) To create the disintegration effect, I first duplicated the original image. I then had to carefully select and remove the background, using the Magic Wand tool, to obtain a clean image of my model.

2) I duplicated the resulting image. Using the Transform > Distort tool I started to distort it, basically stretching it vertically and horizontally to make it look abnormally bigger, and then I blurred it. 3) Next, I added a layer mask and filled it with solid black. I made sure white was the active foreground color in the toolbar, and then I selected a small, square-shaped Brush to create a messy, "dynamic dispersion" effect. To do this I clicked on the layer mask and started to reveal small areas of the underlying layer in the Layers Panel, and when I was done, I achieved the "splatter" effect I was looking for. (More information on creating a dynamic dispersion effect can be found on the internet.) 4) I added some cracks by adding a picture I had previously taken of a cracked wall. I set the layer blending mode to Hard Light and also applied a layer mask with the texture selected so that the texture had the same shape as the model. 5) I added another image of peeling paint from old iron that I found in my photo archives (you could also use an image of an old wall or pavement). Again, I set the blending mode to Hard Light and masked it onto the model's shape. 6) I added the last layer of peeling paint, masked it onto the shape of the model and set the blending mode to Multiply.

7) Now it was time to add the background picture of the beautiful sunset sky, which I placed beneath all of the other layers. I made sure to warm up the tones a little bit to reach the desired effect.

8) I then applied a Levels adjustment layer, increasing the Highlights or enhancing the Shadows as much as I needed to achieve my desired mood.

9) Finally, I added tiny details like small debris all around her to make it look more realistic.
TIPS
Photoshop is an amazing tool for post-processing and editing, but I must admit it requires a lot of patience. While I was working on this image, I had to watch a lot of tutorials to help me. So my point is, you must try and try again! Sometimes just adding a different adjustment layer or changing the layer blending mode can make a huge difference.
BIOGRAPHY
I'm from Italy. Ever since I was young I've been a curious person, and I've always tried to find a rather unique way to express my inner feelings and personality. Due to my curiosity and artistic attitude towards life, I've always felt inspired to experiment in different artistic fields, such as painting or even sculpting with different media.

I believe my passion for photography was yet again due to the fact that I love experimenting, especially in a creative way like conceptual photography. Photography enables me to express my feelings or even experiences in one shot. As they say: A picture is worth a thousand words. So I really think that photography is an amazing way to freeze a fraction of time.