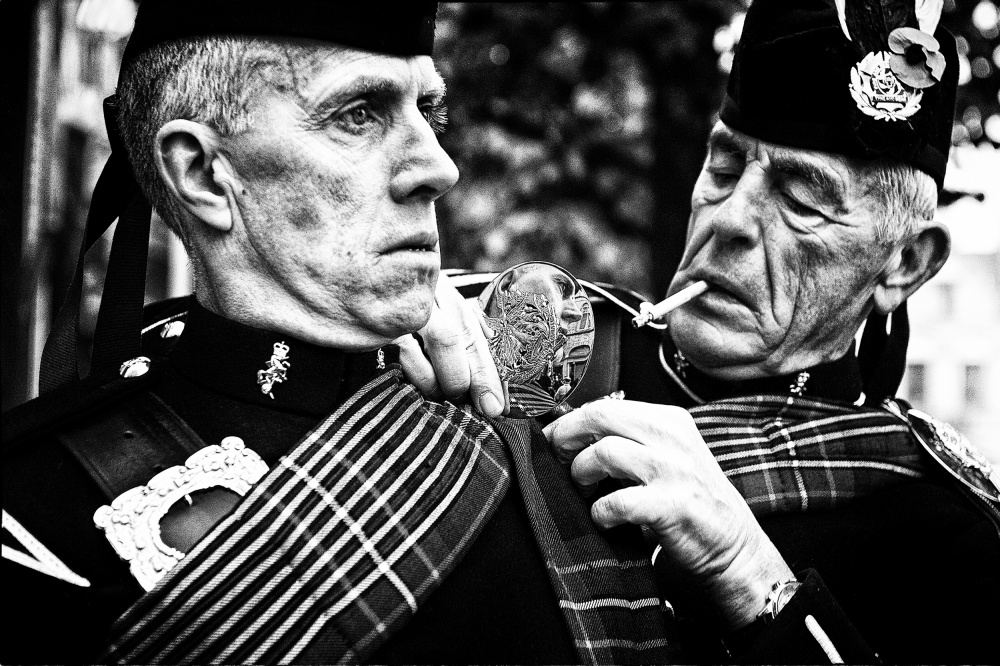 "Getting parade ready" by Susanne Stoop.
Street photography has many aspects and some of them will be shown in this review of seven images which were made within public and semi-public places.

Speedy Ghemati shows us his commentary on life, by combining several elements in such a way that he creates a new reality.

There is the calm, almost documentary approach of Barbara Read with her street shot of a group of children enjoying their ice cream outside the ice cream shop. Opposite this calm street image is the dynamic picture of Peter Hrabinsky. Lively little guys who almost seem to be dancing before the camera whileflashing the “sign of the horns”. Both photos give an inside view of two very different worlds and their realism, theme and often interactive qualities, are representative of the photographic approachin street photography.

Jacqueline van Bijnen's photo shows us the humoristic side of street photography. Art/bog's photo too can make you smile. The humour in his photograph of the tired guard and the energetic tourists is subtle, but touching.

The review concludes with two street photographs that show people in a contemplative mood. Bruno Flour snapped his pensive son during a train ride, while Hans Knikman portrayed a man sitting on a sidewalk behind a crowd, seemingly lost in thought. Completely different settings for both photographs, however sharing the common theme of an introverted, reflective moment.

18 Millions by Speedy Ghemati
On the internet I read a very nice definition of street photography. It said, amongst other things, that a street photo should constitute a moment of synchrony between unrelated elements. And that's exactly what I'm experiencing in Speedy's photograph. The violin player is the main protagonist in this photo. He is playing his tunes, unnoticed by the passing lady, who is deeply emerged in her thoughts. Behind her a mother and her son, also living in a world of their own, staring at the photographer. It seems that for them the musician is non- existent and so it is meaningful coincidence, that he is pictured while standing in the shadow. Likewise meaningful is the advertisement in the corner - 18 million euros to win. The dream of prosperity for people who may be poor.

The scene is a combination of various - unrelated - elements: the violin player, the advertisement, the three people, which merge together in this photo and thus giving it a meaning that transcends the factuality into a new reality. Speedy reached this result because he comes very close to his subject, concentrating on the essentials of the scene and waiting for the persons being at the right place at the right moment. All persons are well positioned. The lady, slightly out of focus - a good choice. byleading the eye towards not only the violin player, but also towards the mother and son who are more in the background. She connects those two with the musician and the millions, which are as unreachable for them as they are for the violin player. 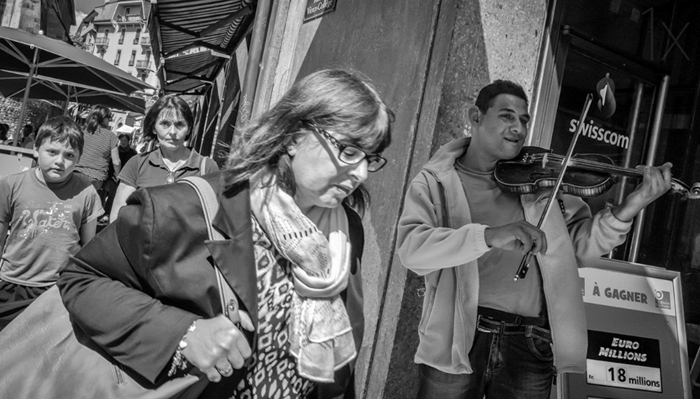 Ice cream social by Barbara Read
This is a lovely social happening and a charming photo on which lots of things can be discovered. First of all is there the boy, who doesn't interact with the other children. While the others are busy with each other, the boy in the middle spotted the photographer. Between the two groups of socializing children one can see interesting similarities. The outer children are the interested listeners to what the others have to say. In both groups it is the middle child who does the talking. Pairs form an important part of this photograph. Two pairs of three children, three windows and in the windows three pairs of four (small) pictures. They are brought together in a balanced composition, which breathes peace and quiet.

Barbara approached her subject in a documentary way, which is fitting for the theme of the photo, telling a story of a moment in the lives  of these children. They live in a rather structures worldorganized around them. What a difference to the children in Peter Habrinsky's photo! 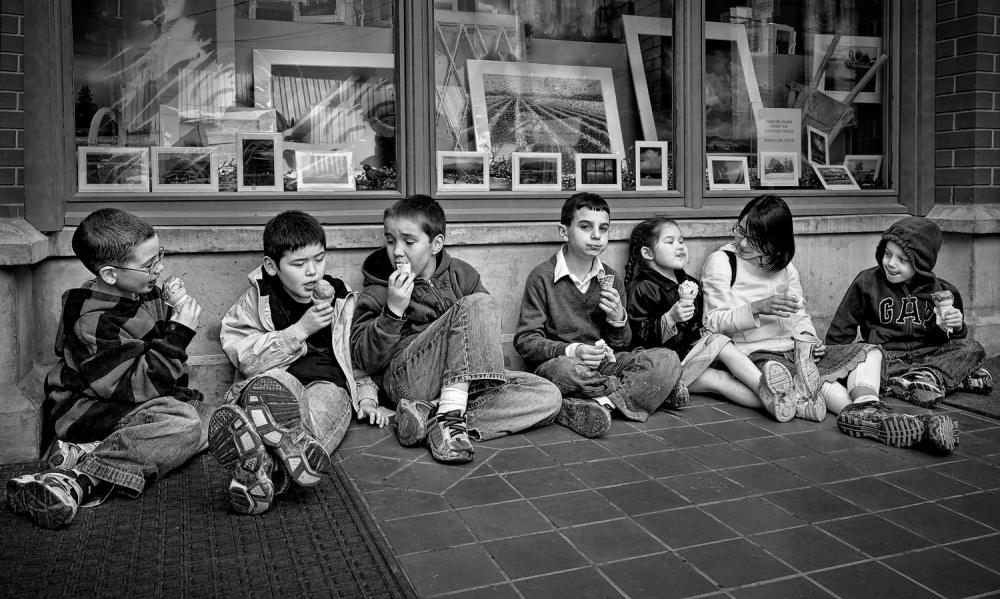 Jasov by Peter Hrabinsky
The children of this quarter of Jasov (Slovakia) live a rough life. For them there seem to be no ice cream social, and their lives appear to be different than that of the children in Barbara's photo. Yet there are still similarities. Look at the boy in the middle who is fascinated by the camera. His eyes are full of curiosity! He is so intrigued that he seems to forget everything around him. A bit like the boy in Washington, where Barbara took her photo, but with a more reserved, more distanced look in his eyes.

I very much like the composition of this image. It shows the boys in their  environment. Without those desolate apartment buildings and their cluttered environment the photo would have been incomplete. Placing the boys in the foreground has been  a good choice. It gives the photo its dynamic look.

There is a strong gradient of contrast in the photo. It is beautiful that the contrast in the background is soft. It creates a distance with the main subjects of the photograph, being the boys. They are displayed in a strong, harshcontrast. I was wondering if it wasn’t possibly too strong. For instance the eyes of some boys are like black spots. On the other hand if more details were to be seen, they would have attracted more attention than the boy with the curious eyes, who is after all the main character. 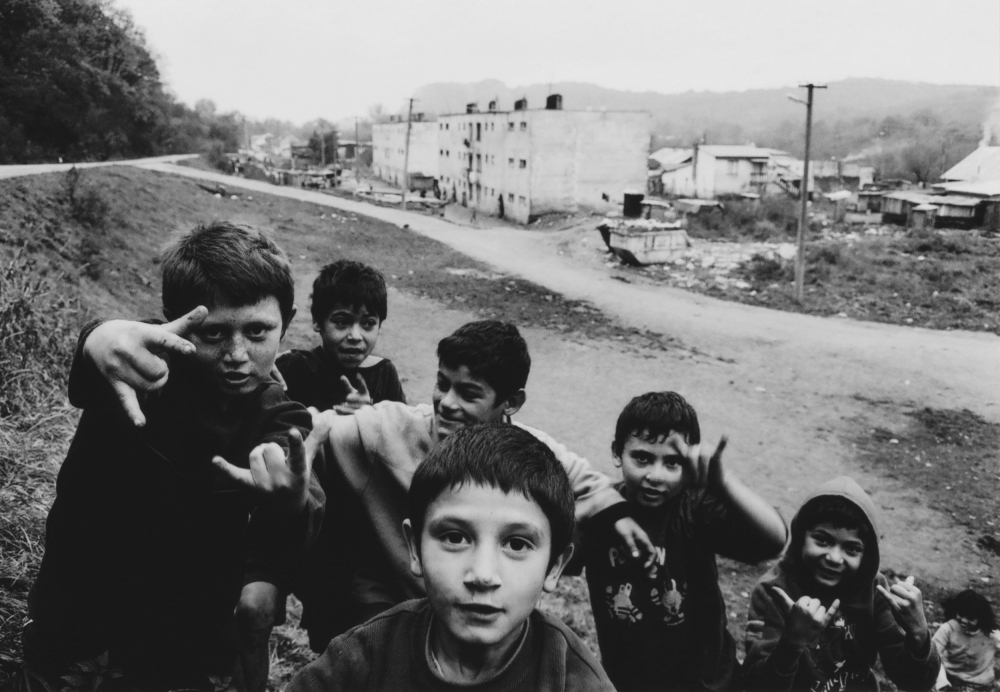 While the older man is just looking into some void - just like the dark object at the right of the photo - the younger seems to be rather astonished, which is strengthened by his shadow. It is as if he realises that something is missing, but he doesn’t seem to be disturbed by it. It is just a fleeting moment, caught at the right time by the photographer.

Like Speedy, Jacqueline combines various elements in her composition, creating a non-existent context and with it a new reality. She cleverly uses a repetition of forms - two men, two shadows, two pairs of legs wide open, two suitcases, one bag and one iron ball - making this image into an interesting one. 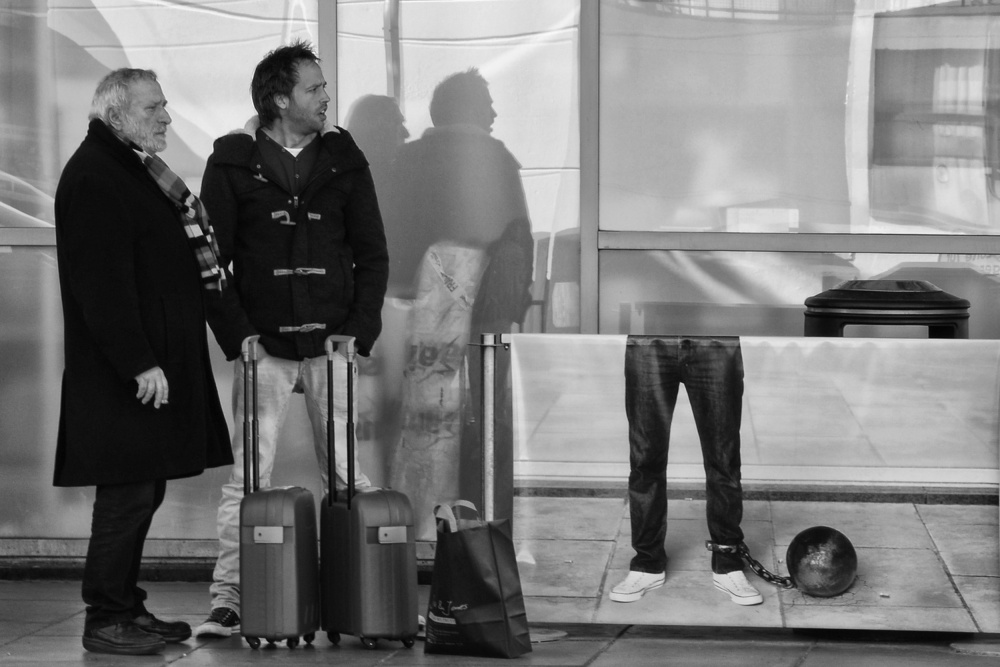 Good morning Shanghai – Art / bog
Art captured this photo while walking along the Bund in Shanghai when he discovered this security guard resting his head on a ledge, while tourists are busy taking pictures of the Shanghai skyline. The scene is one of contradictions,characterised by the resting guard and the active tourists, snapping each other, maybe for spreading the news back home of their travel experience at the Bund in Shanghai. They have no interest in the guard, just as the guard at this moment seemed to have no interest in them. It made me smile, this fleeting moment, turned into a nice street photo, which also gives us an idea of the location and context where it all happened.

Lost in thought by Hans Knikman
While the surrounding people at this public gathering seem to bestretching their necks in order to miss nothing of what is going on in front of them, this man sat down. Tired and seemingly lost in thoughts, or overwhelmed by emotions perhaps. The scene reminded me of Henri Cartier-Bresson who in a report on the coronation of King George VI had more interest in the crowds than in the pomp and circumstance. It is the same here. Hans Knikman is interested more this man with his expressive eyes, sitting on the sidewalk, than in the things that happen in front of the crowd. It is also a portrait of an individual, who created his own space in the midst of an anonymous crowd.  It is as if the photographer wants us to show, that any mass gathering consists of individuals, just like this man here on the sidewalk. 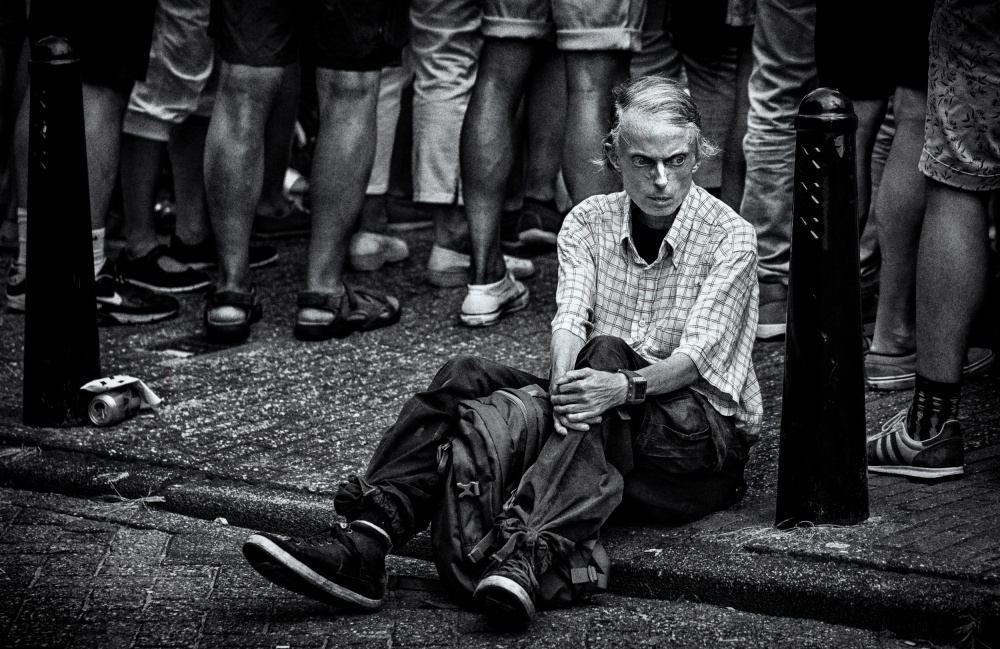 Lost in thought by Hans Knikman

The pensive traveller by Bruno Floor
Like Hans Knikman, Bruno Floor shows us the more contemplative side of life. Here we see Bruno's son lost in thoughts while the train is leaving Antwerp (Belgium).  As if to emphasize the mood, the boy is placed in darkness, with just a bit of sun on his face and isolated from the bright city outside. Hans Knikman emphasised his pensive man by placing him in the light, Bruno chooses the opposite lighting for emphasis, but both are focusing on the mood of the moment. In both cases, it is the light-dark contrast, which characterizes the photo. 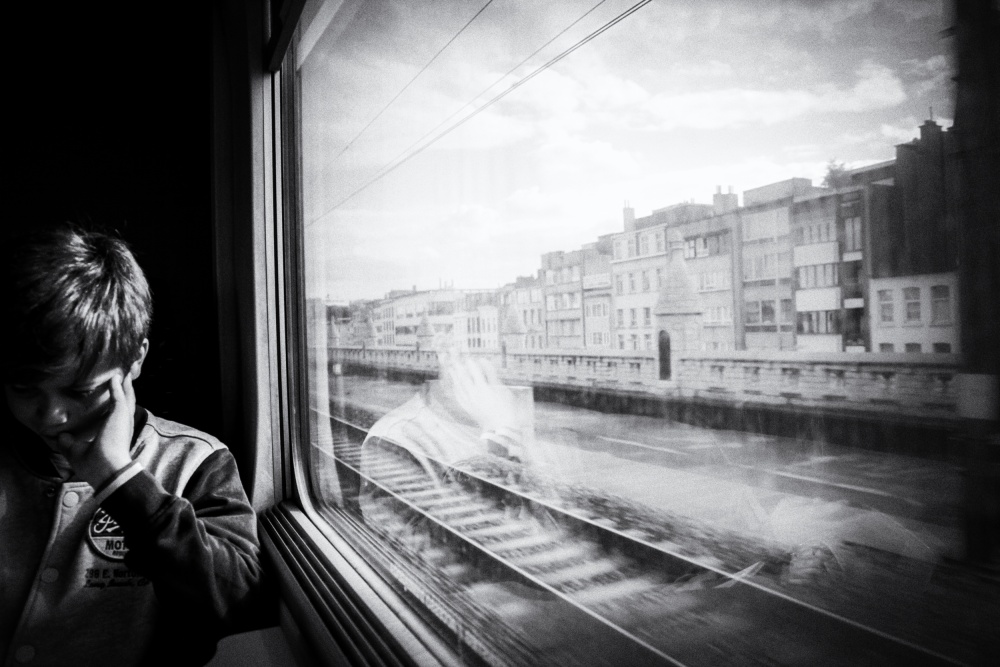 The pensive traveler by Bruno Flour