Llyn Celyn is a reservoir constructed between 1960 and 1965 in the valley of the River Tryweryn in Gwynedd, North Wales.  Its development was steeped in controversy as its construction involved flooding the village of Capel Celyn and adjacent farmland.  The opposition was brought about as the village was stronghold of Welsh culture and the Welsh language, whilst the reservoir was being built to supply Liverpool and parts of the Wirral peninsula with water, rather than Wales. 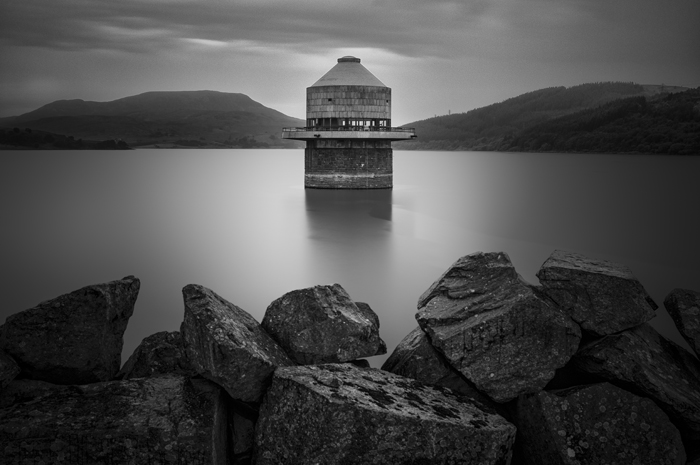 On this day it was belting down with rain, really hammering it down. And I had gone to Wales without a rain coat!! I walked along the reservoir wall getting soaked looking for an Ideal composition featuring the control tower of the reservoir. I had already settled on the idea of the valley in the distance somehow holding the structure in my composition with the jagged rocks in the foreground.
Once I had found a composition that suited my ideas I found a spot to shoot from. Wearing totally inappropriate footwear for the conditions I precariously crossed a wet and slippery bolder wall to find the spot to shoot from.

I set the camera up on the tripod carefully making sure it was true using the inbuilt level system which I often find really handy. On such a grey day with such flat lighting calibrating an exposure was simple, Aperture priority, matrix metering, -0.7 ev. This gave me a base exposure to work from.

I placed the Circular polariser on the lens and while looking through the view finder I rotated it to reduce the glare I was getting form the wet rocks in the foreground, I focused the camera on the rocks and captured my first image. I removed the Filter carefully trying not to disturb the camera.

I focused the camera on the structure in the center of the image, flicked over to manual focusing, and then mounted the Lee Bigstopper. Using bulb mode and a cable release I did a timed exposure 10 times longer than the original shot to give me smooth flat water. Fortunately the rain was coming in from behind so there were no rain spots on the lens or filter.

In Lightroom, I lens corrected the 2 images before opening them as layers in PSCS6.

Firstly using the selection tool I ‘cut out’ the foreground rocks from the first image deleting the rest of the scene from that shot giving me a ‘focus stacked’ landscape featuring smooth water, soft clouds juxtaposed by jagged rocks and a concrete structure.

On the rocks layer I used the Nik Color FX 4 detail extractor and dynamic contrast tools to enhance the tones, textures and other features.

Then on the other layer I used Viveza 2 to add structure to the Tower which was applied using layer masks and the selection tools. Selecting the water using the pen tool I reduced the contrast and added a halo using the marquee tool.

The image was flattened and returned to Lightroom. I converted the image to B&W and played with the colour channels until I was happy, then with the local selection brush added some highlights to the clouds behind the tower to make it pop and some clarity to the hills in the distance before adding a vignette to hold the viewers eye on the subject and a hit of grain to finish.