Do you think high-speed photography is too difficult, requires too much technical knowledge or maybe too many devices that you know nothing about? Believe it or not, you can easily shoot fast-moving liquids in your own home once you know the secret. And you will be surprised to hear how these paint drops exploded right in front of the camera, so read on! 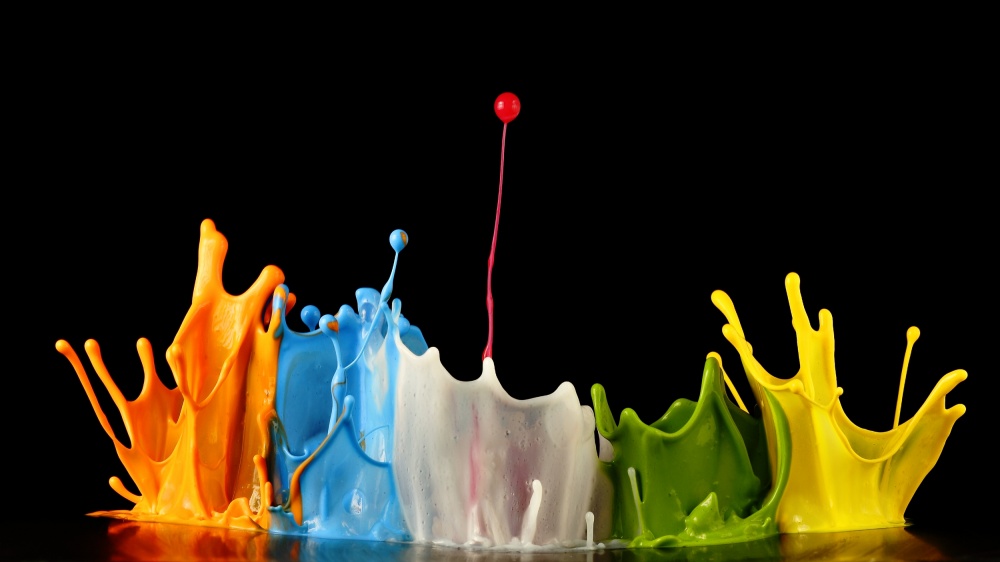 Canon 7D  .  Sigma 150mm macro f/2.8  .  150mmmm  .  1ss  .  f/16  .  ISO100
I believe most photographers like high-speed photography and pictures of colliding drops. This was unfamiliar territory for me until recently, and that's why I decided to make this photograph. The best part of this kind of photography is that there are tons of possibilities and color combinations, so it's a fun challenge to try to come up with an innovative, creative idea that stands out among the many liquid drop photos on the internet. This time I wanted to make sure that the colors did not mix together so each individual drop could be seen easily. As a result, I decided to use loud bass sounds from a stereo speaker to vibrate paint drops and make them jump off the surface, as though they were exploding.


"The swimming cap would serve as a membrane, so when I applied sound, it would vibrate and make the paint drops jump."

I found an old speaker that my dad had lying around, disassembled it and covered it with a black swimming cap. The swimming cap would serve as a membrane, so when I applied sound, it would vibrate and make the paint drops jump. I placed two 20×20" (50×50 cm) homemade methacrylate (plexiglass) light diffusers on both sides of the speaker, as close as possible, and two flashes on each side. You could ask: Why four flashes? Well, simply because in order to freeze this fast motion, you need to set your flashes to very low power, in this case it was 1/32 second. By having such low power, the flash is shorter and that's what freezes the motion. Also, I should point out that the entire set was black — the background as well as the swimming cap — so the light would not reflect off any of the surfaces. For that reason, I needed four flashes to produce enough light. I intentionally used black fabric for the background so the colors would stand out.

So in summary, I used a black cloth for the background, an audio system connected to a speaker, a black swimming cap covering the speaker, homemade light diffusers on each side of the speaker and two flashes on each side of the speaker, all four flashes set to 1/32 second power. The studio (our garage) had to be pitch-black with no ambient light leaking in from anywhere. That way I could control the light, ensuring that the only light came from the flashes.


"I suggest that you experiment with the regulation of the timing device; by adjusting the timing, you will cause the paint to jump higher or lower right before the picture is taken."

The camera was set to bulb mode. To activate the flashes, I used an electronic timing device called StopShot, and I used a microphone as a sensor. The microphone activates the flashes when the music starts. I set up the StopShot so that the flashes would fire 60 milliseconds after the microphone detected the sound. I suggest that you experiment with the regulation of the timing device; by adjusting the timing, you will cause the paint to jump higher or lower right before the picture is taken.

Once everything was prepared, I placed a few drops of acrylic paint on top of the swimming cap that covered the speaker and got ready to take the picture. I had the shooting cable in one hand with the camera set to bulb mode. My other hand was poised and ready to press the play button on the stereo system. I activated the camera first and then hit the play button. The bass sound started and the cap on the speaker vibrated, making the paint jump. The microphone detected the sound, and a quick 60 milliseconds later, the flashes fired. I then closed the shutter on the camera; the picture was done.

Just a heads-up: A major inconvenience is that after each photo, like it or not, you have to thoroughly clean the black cap, which can be very boring.
POST PROCESSING
The post-processing for all of my pictures is very simple. For this image, I only made a few adjustments in Photoshop.

1) First of all, I used the Crop tool to crop away some of the top of the image since there was a lot of empty space. It created a much tighter and more impressive composition.

2) I applied a Levels adjustment layer, and paying attention to the histogram, I moved the sliders to increase the overall contrast.

3) I then added a Curves adjustment layer and created a subtle S-shaped curve to, again, tweak the contrast.

4) Next I applied a Hue/Saturation adjustment layer and played with the Saturation of the colors until they all were more vivid.

5) Using the Clone Stamp tool, I removed a few small paint spatters that were distracting.